Why do we need to Transition?

Life today is incredibly energy dependent. Although cleaner energy is available (and at a good price now) many still rely on imported energy from the big companies that we may be bound by due to rental property stipulation or unaware of affordable options available.

As a society we rely heavily on shop bought food that has embedded in it immense water, material and energy footprints, not to mention the unfair treatment of the people producing the food in it’s country of origin and the unfair pay of the people serving it to us in this country. We aim to collectively grow our own and support outlets and producers to thrive locally to reduce food miles and improve nutritional value.

We aim to work together to inform ourselves to make better decisions to reduce our consumption of goods that are produced by corporations with unsustainable practises and to learn how best to live in the city as it’s grows and expands around us. We also aim to support many more sustainable projects that provide real alternatives for the world we want to create for our future generations.

Transition Liverpool is part of an network of people and initiatives working to implement fairer change within society both locally and globally – it is part of a vibrant international movement that acts to rebalance the inequalities of the human population to one that is more fair and equitable. 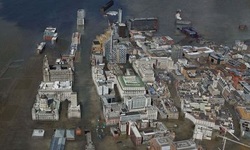 Liverpool, 2051 – After the ice-caps melted
Well, there are two big reasons why this attitude needs to change:

Transition recognises that climate change and peak oil are a ‘double whammy’ that mean change is inevitable over the coming few years. We can’t put our head in the sand and hope the problem will go away or trust that some technological fix will ‘turn up’. We believe that enjoyable, fun, rich livelihoods are possible in a post-carbon world, if we start building it now.

All this needs to be pulled together in an ‘Energy Descent Plan’ that we are aiming to develop. How serious a contribution to Liverpool’s future it will be depends on who gets involved. We don’t want a propaganda document, a bit of cozy PR, or something that gathers dust.

We believe in positive changes built from below, in partnership with everyone who wants to get involved – we are not party political, and work closely with other environmental campaign groups who share our views.