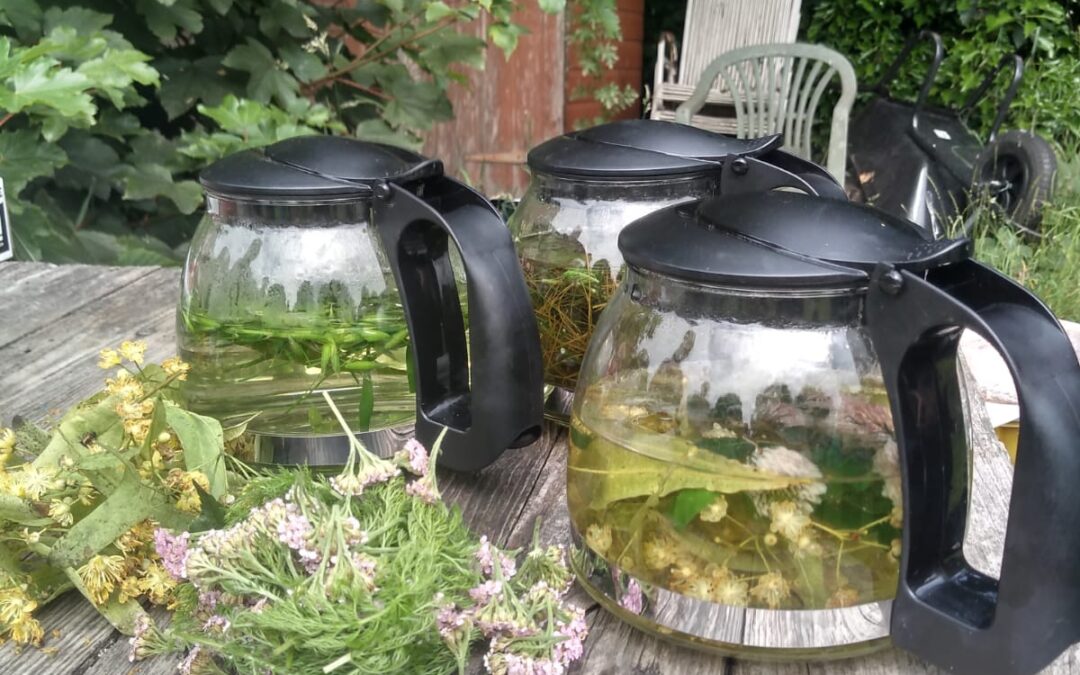 During the third lockdown, those endless winter months at the start of the year, one of my joys was the discovery of the three cornered leek.  this Mediterranean plant has become invasive in the south west of the country and is moving steadily north so finding it in my corner of the world was a mixed blessing – but on a positive note they are very, very tasty plants and from January to March we enjoyed them in sandwiches, as pesto and as an ingredient, along with onion and potato, in a soup. 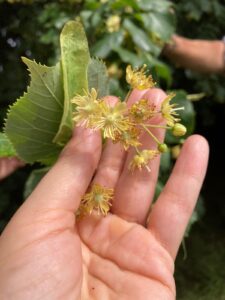 Lime Blossom for our tea

I’ve long enjoyed marking the seasons turn by foraging in a very modest way.  Over the years it is always fun to re-visit favoured spots and to discover new ones. It is much more than a way of getting free food; for me it’s a way of connecting to the land.  But my knowledge is limited and so when I saw that Wil Goodwin of Forager’s Network was running a session at Growing Sudley as part of their fundraising campaign I was eager to participate. The morning was bright and a group of ten or so of us, with a variety of knowledge and a willingness to learn turned up carrying bags and baskets as instructed.

We hadn’t got more than a couple of steps before Wil was encouraging us to “try the daisies,” hmm not bad but we’re told to avoid the buttercups, despite the name they aren’t edible.  Then it wasout of the gates and on to the surroundings of Sudley House and along the borders of the playing fields with lots of opportunity to taste previously overlooked plants, some of which are simply good eating – such as ground elder which can be steamed and served as a vegetable or the aptly named pineapple weed which tastes of – well the clue is in the name.  Others, such as yarrow or the blossom of the lime tree are credited with curative properties.

We finished the session with a cup of tea made from the plants we picked.  Wil cautions good sense when foraging. Don’t trust to luck, if you are not sure of something do some more research, avoid picking from sites on popular dog walking routes or near traffic and unless you really know what you are doing don’t pick mushrooms.   My own tip would be to make use of the apps, websites and social media groups that are available. The Liverpool/Merseyside Foraging Network (Facebook) hold sessions and provide great local information, fallingfruit.org maps foraging finds globally and if you are feeling community minded you can add your own finds – Merseyside has over 500 listed. 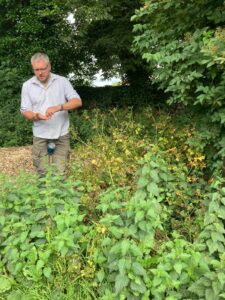 Wil talks us through nettle picking

The event was organised by Growing Sudley CIC to add to their crowdfunding campaign investing in green technology when converting the old changing rooms into group work and therapy space.  A  Spacehive crowdfunder lasts until the 2nd of August.  Other events are planned including a “Plants for Wellness” and “Menopause wellness” event both on July 24th (booking via Eventbrite.follow the Facebook page for info)  These events are very much in keeping with Growing Sudley’s vision; “To revive the hidden gem of a Victorian Walled Garden, make it accessible to everyone and to use growing, exposure to nature and the outdoors to benefit the health and wellbeing of the community.”

In part because of a strong association with Transition Liverpool, Growing Sudley was one of the first organisations to add their name to the Mersey Green Map. At our MGM Fair event back in June organisations came together to think about how the Map might develop to support the sustainable and ethical community across Liverpool City Region and fully realise its’ potential.

Two key elements of this are promoting the work of organisations and supporting sharing of knowledge and skills. Once our website is launched (more news on this soon!) we plan to develop features in a range of formats (video editing skills would be a very valuable addition to our small volunteer team) to offer a regular features spot. In the meantime if you have some news to share or an event you’d like us to know about please get in touch via merseygreenmap@gmail.com (email is checked weekly).