My  mind gets fuzzy when it deals in abstracts for too long so in wondering what a Solidarity Economy might look like I was pleased to come across https://cooperationjackson.org the website for “Building a solidarity economy in Jackson, Mississippi, anchored by a network of cooperatives and worker-owned, democratically self-managed enterprises.”

In this powerful Youtube Video  Kali Akuno describes the history of struggle which led to the formation of Co-operation Jackson.  A mainly rural farming state with most of the land owned by a small group of families, historical, political, economic and social racism impact the lives of all of Jackson’s residents. Whilst Mississippi is a majority Black State the political representatives are currently (or at the time of this video) right wing “Tea Party” Republicans.

In response to a determined and comprehensive oppression of Black people there is a long history of Civil Rights activism, with each generation required to find ways to respond to the same attitudes, dressed up in different systems and technologies. Hence, learning about the need to organise and develop a systematic approach – the ability to strategise and plan responses and to learn from set-backs are hard baked into Co-operation Jackson from the outset.

Even so there is still new learning to be done.  The work as outlined in the Jackson-Kush plan has three main strands; 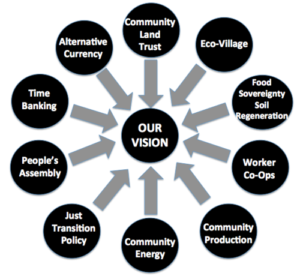 Akuno acknowledges that they began with the Political strand, because “That’s what we knew how to do” but with the benefit of hindsight says there is a strong case for beginning with the Solidarity Economy. So what does the Solidarity Economy look like in Jackson? It is “a bold agenda to create jobs with rights, dignity, and justice that generate wealth and distribute it equitably based on the principles of cooperation, sharing, solidarity, and democracy.”

The plan recognises a strong culture of co-operative and other worker led endeavour “exists within the state and particularly within the Afrikan community” and seeks to build on that.  The focus is on engaging and building bottom up and food production is recognised as a vital facet of that, leading to development of urban farm spaces and a co-operative market and café.  The recognition that improvements in housing, crime reduction and environment is often a signal to developers to move in and buy up property out-bidding the local people has led to a resolution to only work on land that is owned by the community – and a community land trust has been established.

It’s not all progress. Just this last winter bad weather froze the city’s antiquated water system and left much of its populace without water – the energy and efforts of the committed and able had to be diverted into providing the basic necessities, including providing bottled water to older and less able residents.  It is seen as no coincidence but a continuous and deliberate policy by the State to neglect basic infra-structure investments.

So what might these ideas mean when we think about applying them locally?  Across Liverpool City Region (and beyond) projects are gaining traction – many of them are already on the Map (which at the time of writing has 88 projects within the LCR across a broad range of themes and encompassing different structures)

In Anfield the Homebaked Community Land Trust and in Granby the 4 streets CLT  are established Community Land Trusts whilst the Friends of Everton Park are developing plans.  Work on the Mersey Green Map aims to provide Infra Structure to support development of more community and sustainability driven projects to work together as they continue to emerge.  The Mersey Green Map project aims to work flexibly and organically being led by the Projects that populate the Map who in turn are led by their own local community and interest groups.  In this it is both practical and radical – by building these strands of interest and engagement – looser or stronger as the needs of each organisation develop – we are manifesting future possibilities for a locally based, community empowering and sustainable future.

If you are now thinking “Sounds good, what can I do?”