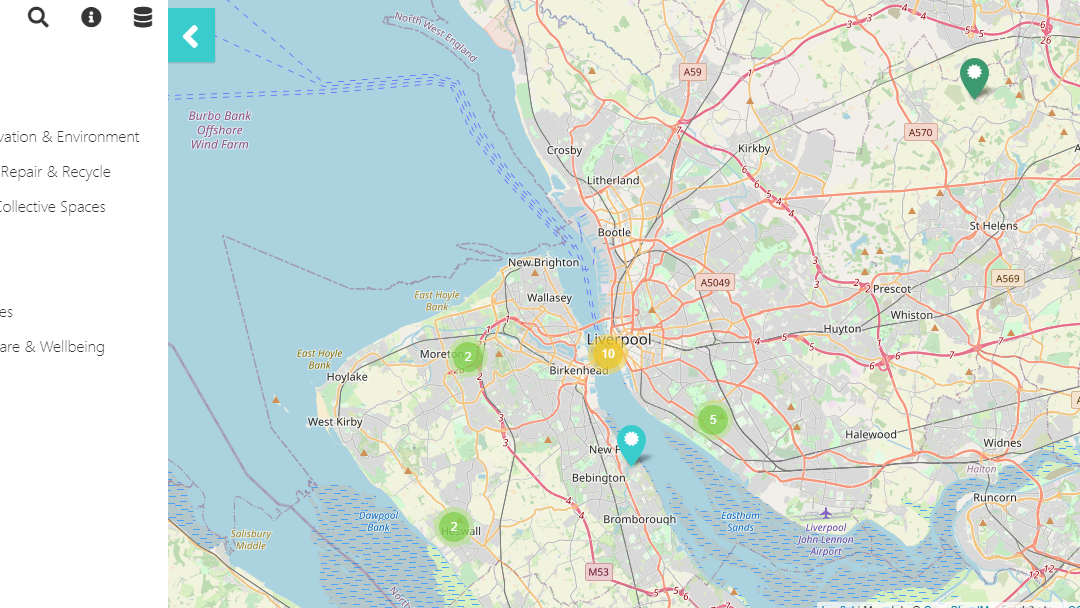 The Green Map concept was kickstarted in New York City, by Wendy Brawer. Following this approach, the first (printed) Green Map in the UK was produced in Liverpool, between 1996 and 1998. Wendy came over from New York to visit Liverpool as part of the launch. 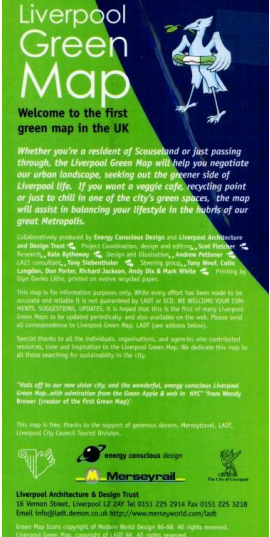 With newer technology, Green Maps started to go online – a number of example maps from Swansea (see below) inspired Nick Drew to start investigating an updated Liverpool Green map, 20 years on from the original one. Wendy wrote from New York, very enthused to hear that this idea was being considered again within Transition Liverpool.

This fed into a Transition Liverpool Symposium in 2017 (Imagine Liverpool) at the Quaker Meeting House, run by Catherine and Lucy, where we started to capture information about what was happening in the Liverpool region. The information was captured on large hand-drawn maps, and later moved to a spreadsheet. 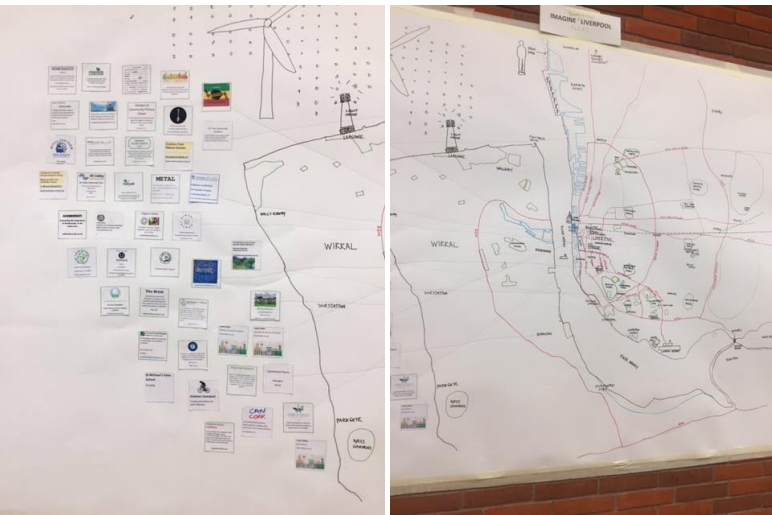 Following the symposium, a few local maps were made by members of Transition Liverpool – the Heswall Green Map was created by Nick as part of new Transition Group Planet Heswall, and a North West growing places map was also created by Bryan.

There was an initial intention that a new Liverpool City Region Green Map would come from the LCR Year of the Environment in 2019, to showcase everything that was going on across the City Region, but it was only when Transition Liverpool took on the task and put significant effort into the Mersey Green Map project that the idea finally came to life, in 2020. 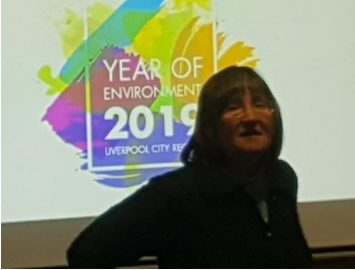 9 January 2019 – Margaret from Transition Liverpool at the Transition Café event to mark the start of LCR Year of Environment. 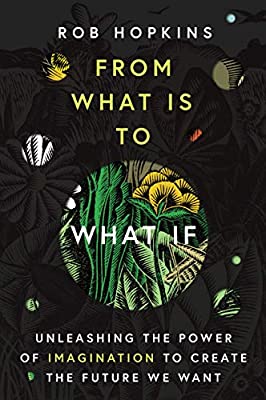 The idea of a Green Map, showing “What Is” already happening, ties in neatly with Rob Hopkins’s latest book (From What Is to What If) and the new Transition Bounce Forward initiative. This is helping set the scene for more creative, imaginative thinking about our vision for a greener future in the areas we live. The timing for this launch of the Mersey Green Map (What is) fits perfectly with the Transition Bounce Forward programme(What if), which has run from September 2020 onwards.

The Launch of the Mersey Green Map

A partnership between Solidarity Economy Association, Transition Liverpool and Wirral Environmental Network was held on Thursday 19th November at 7.00pm

More information about the Mersey Green Map and how to join can be found here.

We came together (virtually, of course) on a dark Thursday night to witness the birth of the Mersey Green Map – an ambitious collaborative event that has real, practical potential to build a network of organisations and people across the Liverpool City Region – all of who are committed to putting people and the planet before profit.

Simon Hamilton from Transition Liverpool introduced the Map, explaining that it is a collaboration between the Solidarity Economy Association, Transition Liverpool CIC and Wirral Environmental Network. Simon gave us a glimpse of the potential of the Map – not only to publicise businesses and organisations – but also to create and nurture a network of support.

We then heard from Colm Massey, Solidarity Economy Association who explained the focus of the Solidarity Economy which works locally, nationally and internationally to promote democratic decision making.  Based on 6 principles the approach is pluralistic and pragmatic but nevertheless radical in the commitment to change.

Patrick Hurley,  Liverpool City Councillor told us about recent developments in Liverpool, the introduction of EV charging points and the work to develop and support cycling in the city.

Margaret Smith (Transition Liverpool) then introduced us to the Map and thanked the many people and organisations who have been working together to get us to this point – in particular Dinah and Lucy Dossor, Brian Irving and Jago Smith, Liverpool Quaker Meeting and Olivia Hanks, Naomi Graham and Colm Massey.

Demonstration of the Survey and the Map

We then enjoyed demonstrations of how to add organisations to the map with Lucy Dossor (Growing Sudley CIC) and Rachel Johnson (Windmill Foods) both demonstrating how simple and user friendly the process can be. The aim is that very small organisations will be able to add themselves, as well as bigger groups.  After the survey is completed an authorisation process ensures that locally based, people and planet friendly organisations are included – and that  profit  focused and “green washing” organisations are not.

Laura Robertson-Collins, Liverpool City Region Cabinet Member for Environment and Sustainability, congratulated all those involved in what she described as a “fantastic development.” Laura pointed out how the pandemic had demonstrated the importance of local services and the vital importance of  being connected to nature. She told us that the LCR Climate Action Plan is now under development and the organisations represented on the map have a vital role to play.

Paul Riley Director of Transition Liverpool CIC said; “The Liverpool City Region could be the greenest in the UK, the map has the potential to demonstrate and build critical mass for the benefit of all.”

Councillor Gideon Ben Tovim: Mayoral Advisor to Steve Rotherham on the Environment spoke about the work going on across the City Region to promote sustainability – including access to two funds, the Green Investment Fund and the Community Environment Fund.  These are designed to stimulate growth in the sector and, coupled with a focus on improvements in travel, development of initiatives by the Waste Authority, extension of the Mersey Forest and a commitment to retro fit existing housing stock, there is real potential for change.

Lisa Hoyle spoke of the commitment of Liverpool Quakers and Quakers across the region to supporting the Mersey Green Map and expressed the hope for further involvement as the initiative develops.

Councillor Lawrence Brown spoke of local initiatives in his ward of Greenbank to support small businesses, promoting joint working and building mutual support and how this was fundamental for local communities to flourish.

Councillor Pat Cleary envisaged the potential of the Mersey Green Map to provide a network of support but equally important, to provide a forum for communicating with decision makers, lobbying for a voice for smaller organisations for the benefit of the whole community.

Joe Pusey from the Circular Economy Club spoke about the shared interest and common cause – hoping that the two groups will work together for the greater good.

Naomi Graham, representing Wirral Environmental Network pulled the various strands together explaining that WEN had been working since 1985 to build a strong coalition and the map was a very significant step along the way to building a resilient local economy. Working together, we have the potential to lead the way in sustainability as a city region.

The event came to an end with thanks by Simon Hamilton, on behalf of all, to the speakers and to the organisers of the event.

There was a lively chat feed through the course of the event – discussion about accessibility issues for people with disabilities and questions about the potential to expand the Map beyond the City Region Area both supporting the ongoing work to develop Mersey Green Map as a common good for the planet and for people.

Organisations who are part of the Solidarity Economy seek to develop some or all of the following: